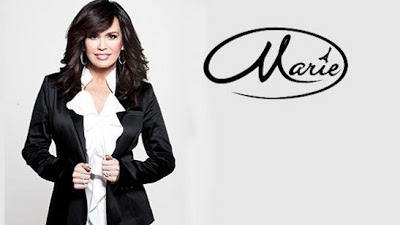 what an experience. living in close proximity to tinsel town, it's always a fun trip to go visit the live set of a talk show. This week we decided to visit "Marie", which is Marie Osmond's talk show on the Hallmark Channel.

"...This new Hallmark Channel Original Series marks the long-overdue evolution of the iconic Marie Osmond to the daily talk show world. To be sure, the woman has done pretty much everything else in her glorious and storied career: movie star, national variety show star, recording superstar, Broadway star, Las Vegas stage shows-stopper, and so much more. But with “Marie,” she may finally be growing into a role that fits her better than any other. Here, after all, is a woman who has not only known great fame but also great tragedy. The talk show will afford Osmond an opportunity to share in the lives of others, both the famous and non-celebrities alike. With the one-hour daily lunchtime show on Hallmark Channel, she will impart her insights on surviving all of life’s roadblocks and detours, along with heartfelt advice about how to deal with great adversity and move
forward with dignity, humor and optimism."
- www.marieosmond.com

What I liked:
- First and foremost, Marie Osmond is hands down down to earth and has an exceptional work ethic. She was beyond polite, and courteous to the audience… Really taking the time to interact with us and thanking us for being a part of her studio audience.
- Free stuff! It's not much, but it's definitely a nice take away from the trip.  We received a workout dance DVD and emergency preparedness food
- Even though the studio was on a smaller scale, it was very intimate and allowed for a very personal experience with Marie Osmond.


What I did not like:
- There is a definite sense of disorganization With the way the audience members are checked into the studio and seated into the studio. I highly recommend them to work on a first-come first-served basis.
Tip!: If you do ever received tickets to the showing, make sure you check to see if your ticket is a "priority" or "line voucher". There is a huge difference…Priority seating will be guaranteed to get it, while Line Vouchers will be used as filler seats
- If you showed up early, it did not guarantee you a seat up in the front
- As ridiculous as it seems, the clapping does get annoying…
- The crew maybe new and inexperienced to this season one of "Marie", Didn't seem as friendly.