Today's adventure followed a particular trend that you might have noticed on our recent outings. Visiting the X Factor Live Auditions was the next stop on our live TV adventure series. X Factor which was now filming it's 3rd Season, held it's Los Angeles auditions at the Galen Center at USC.
What a blast this show was, I suppose you always envision what it's like to actually be there, and it's fun seeing what actually happens, to what ends up being on air.

The X Factor with it's recent shake up of judges, is currently judged by Demi Lavato, Paulina Rubio, Kelly Rowland and Simon Cowell. However during our taping, Paulina Rubio was a no show (or at least not present during the taping).

The call time that was requested on the ticket was 1:00 pm. We decided to get there around 11:30 am. As we made our way to receive our tickets, we noticed that contestants were being interviewed and were singing to see if they had the "x factor". Once we received our tickets were were told that the tickets were assigned seating so no need to wait around, just to be back before 1:00 pm.


In order to kill time and cool down, my mom and I decided to go have a drink at Lab, a gastropub that was located walking distance from the Galen Center. Great mimosa for $3 (weekdays from 11am-3pm).


1 o'clock came and it was time to line up, and boy was the heat out in full effect. When you get heat plus people cramped up in the sun, people start to get fidgety. We were out in the sun waiting in line for approximately another hour and a half. People were having heat exhaustion, the whole nine.


Once inside the air conditioning was a sign of relief, people started making their way to their seats. Of course movie magic has it's way of making things appear bigger on TV then they actually are in real life. The set is rather average size compared to the enormity of a set you envision from seeing it on TV.


While waiting in the theatre for the whole audience to settle in their seats, they played a variety of music videos from previous X Factor contestants from both the US and the UK versions. They also picked audience members to stand up and sing to see if they had the "x factor". Overall the experience rather entertaining, and quiet enjoyable.


Simon, Kelly and Demi were all very nice and very professional, I mean this is their job. As anticipated the crowd went wild the minute the judges even slightly waved their hand in an audience member's direction.

Once it's all said and done the show does take approximately four hours to film. The great thing about this show was the fact of how awesome the cast and crew worked. We've been to other shows where people were disorganized and had zero clue of what to do. The crew of the X Factor were professional, punctual and efficient.

The only downer about this whole experience was the $20 parking.

& always remember it's always a good day to get off the couch...
Posted by kriswithakay No comments:

happy fourth of july!
Hopefully everyone has a safe and fun Independence Day.
I decided to take advantage of my day off, and get off the couch and go explore a bit.

"Metro offers regularly scheduled as well as special request group tours of the artwork in the Metro Rail system. Tours are led by trained Metro Art Docent Council volunteers. The Metro Art Docent Council is committed to increasing awareness of the broad range of art in the Metro Rail system through public tours that provide insights into the artworks, the artists who created them, the processes it took to make them, and the communities they enhance. While docent programs are commonly found at museums around the world, Metro is the first transit agency to benefit from such a program."
-http://www.metro.net/about/art/

The tour met promptly at 5:30 pm at the entrance to the 7th Street/Metro Center Station, at the corner of Figueroa and 7th Street, under the ceiling by Terry Schoonhaven. I recommend showing up with ample time, because it might be a little difficult to find. As a recommendation there is a $6 parking lot near by if park anytime after 4:00pm.

The tour was guided by Barbara and Alex, who were both excellent docents, extremely informative, and well versed in the history of the Los Angeles Metro Art work.

There were a lot of people on this tour, I don't know if it was due to the fact that it was a holiday or if people are that interested in the artwork found in the Metro, either way it was big group. This tour is free, except if there is an abundance of people, they might run out of TAP cards that are needed in order to travel through the metro. I had to purchase a TAP card because they ran out, it wasn't that big of a deal, and no one seemed to care.

The tour kicked off traveling down the Red Line to Union Station.

Union Station was built in 1939. It is considered to be the last of the "Great Stations". A unique feature of Union Station is that it is extremely quiet given the number of trains and buses and depart and arrive to the station. The quietness is attributed to the face that walls are made with cork that absorb the sound waves.

The ceiling of Union Station is ornately painted with a vibrant geometric pattern. The ceiling was painted to mimic the look of wood, when actuality it's a mixture of cement and industrial material.

A fun fact about the marble in the middle aisle of Union Station is that since the flooring is made from a variety of marble all with different rates of degrading, and if you glide your foot from left to right you can feel the groves of the ground.

The East Portal of Union Station houses an amazing geometric dome. The real unique feature of this dome is the fact that the square tiles are specifically sized in order to create the illusion that the dome is higher than it actually is.

The tour then proceeds back onto the Red Line, where we see another artwork by Terry Schoonhaven (the man who painted the ceiling under which the tour starts).

The last stop on the tour is Grand Park, located right in front of City Hall.
The artwork that is located in the Grand Park Metro Station are these unique flying men that are suspended from the ceiling. These men are to represent a sense of flying. The overall theme of the artwork located in the metro, is "movement", they are to represent the people of Los Angeles moving through time, space, and through their daily lives.

A feature that is also very unique to the Los Angeles Metro system, is the fact that every single station is uniquely designed to look independently different then each station. The reason behind this, is so that passengers can merely look out the window of the train and be able to see what station is their stop. Metro is highly emphasizing for commuters to recognize the stations, and for people to feel comfortable using the metro.

City Hall has always been one of my favorite sites in Downtown Los Angeles. I didn't know that the tour ended in Grand Park, but it was quite a nice site to see as the sun began to set. There was a high level of security and people surrounding Grand Park do to the Fourth of July fireworks that were going to be hosted at the park.

One thing that fascinates me is the sights and sounds of downtown Los Angeles. There's never a dull moment.

While on the tour if you look on the walls of the stations you will see a variety of maps to guide you.

I also recommend that if you're taking this tour, it ends at Grand Park Metro station. If you parked over by Figueroa and 7th Street, I recommend asking your docent for detailed instructions on how to get back. I am a little well versed on how to get around on the subway, but if you are not I recommend just stopping and asking, don't be afraid to speak up.

It being fourth of July, fireworks had to be lit up. I ended an amazing day with my sister from a different mister brittany hampton (@brittany_hampton). Overall it was a fun day in downtown la, and having some drinks and blowing stuff up.

I invite anyone that is interested in Downtown Los Angeles, to visit the metro art tours website (the link is provided at the top of this page), because they offer a wide variety of tours at different LA locations.
You will definitely see more posts in the future from different tours.

Another recommendation that was given to us by the docents was that Grand Park  throughout the summer are hosting different events, all of which you can check their website for.

& always remember it's always a good day to get off the couch...

back at it again! with the summer in full swing, staying healthy and active is top priority. I decided to go to my new favorite local hiking spot, Hellman Wilderness Park. There are many different trails, so you're never seeing the same trails twice, so you can definitely catch me here this summer.

If you need information on Hellman Wilderness Park,
make sure to visit my post on HWP, where I posted everything that you need to know

MAN OH MAN! if i thought the first time around was a challenge, the second time definitely kicked my butt. This time going with a little more time, I decided to make it to the water tower, which I did not go on my first attempt. What a beautiful site it is!

One of the true rewards of hiking besides the exercise is the VIEW!
and Hellman Wilderness Park is not short of giving you breath taking views.
(don't mind the layer of smog)

Hellman Wilderness Park is located on the adjacent hills from Rose Hills Cemetery. You have amazing views of the cemetery. One prominent structure that is visible from the trail in the Buddhist mausoleum that is located at Rose Hills

If you're a fan of graffiti art like I am, and enjoy the works of Shepard Fairey, then all the pain from the hike is a gain at the top. There is a water tower at the top of the hill that has been "vandalized" with graffiti, and it's quiet a site. In the sea of earth tones, the burst of colors makes quiet an impression on any hiker.

As always when in nature, you always see all types of birds, insects and critters.

The trails at Hellman Wilderness Park are pretty easy, with the exception of the steep hills, its a nice trail to spend a couple hours with some friends.


As I mentioned in my first post about HWP, it's a fun local hiking trail that allows someone to break the routine of working out at the gym, and take their fitness outdoors.

I also started logging in all my walks using Nike+, I'm a very visual person, so need to be able to see my results, and the Nike+ app is a great addition to any workout. It's a great tool that is pretty accurate as far as location, distance, time and calories burned. I'm also thinking about getting the Nike Fuel Band...comments? suggestions? let me know 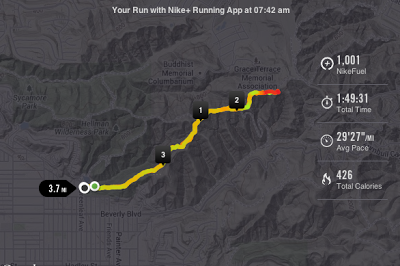 Always remember to GET OFF THE COUCH!
life is too short to be sitting on your behind...
Posted by kriswithakay No comments: