Well the summer weather has decided to make a late arrival this summer. It's been ridiculously hot here in southern california. Sweating bullets and air conditioner at full blast in the car, today's adventure took us out to
Beverly Hills, CA. 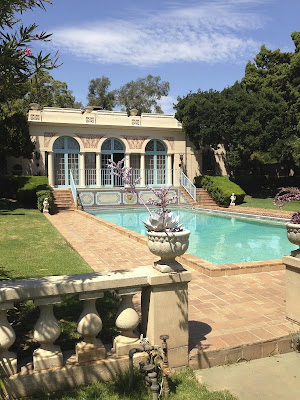 The Virginia Robinson Gardens are a representation of an early twentieth century estate. Harry and Virginia Robinson were known for their department store called Robinson's and civic philanthropy. They built the main house in 1911, in a Beaux Arts style. The residence is furnished with antiques and artifacts collected from around the world.
The Renaissance Revival Pool Pavilion was built in 1924 and is modeled after the Villa Pisani in the Tuscan region of Italy. Decorative panels of Sgraffito ornamentation adorn the Roman arches at the entry to the pavilion's Solarium. The Pavilion overlooks a long pool with mosaic tile wainscoting.
Virginia Robinson Gardens 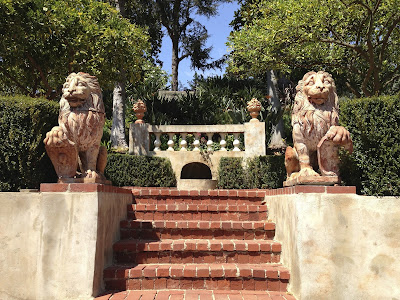 The tour last approximately about an hour and a half. 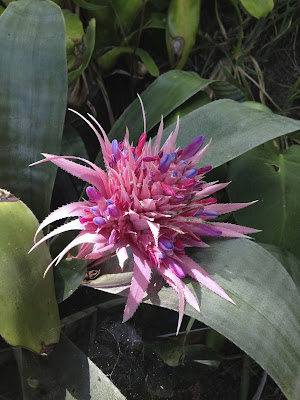 There is a lot to see and great picture opportunities. If you are going in the summertime like I did, prepare yourself with a bottle of water. 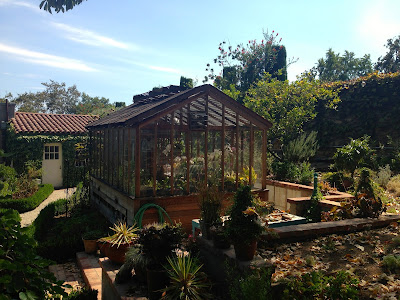 Overall it was a great experience, and amazing history behind the beginning's of Robinson's May. 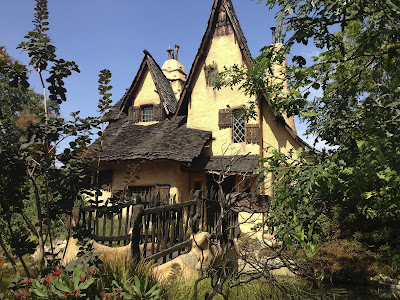 The Spadena House, also known as The Witch's House, is a  story book house in Beverly Hills, Ca. Located on the corner of Walden Drive and Carmelita, it is known for its fanciful design that intentionally cause it to look dilapidated and old, and is a landmark included on tours of the area.
The house was designed by Hollywood art director Harry Oliver, who went on to play a major role in Storybook architecture. It was originally built in 1921 to serve as the offices and dressing rooms for Irvin Willat's film studio in Culver City, and was moved to its present location in 1934. The converted private home, with its pointy, lopsided roof, tiny windows and stucco with a distressed paint job were then surrounded by an intentionally overgrown English-style garden and a moat-like pond.
The first residents of the 3,500 square feet (330 m2) home, the Spadena family, lent the house their name. A second family moved in and renovated the interior in the 1960s, making some exterior alterations including a skylight visible from certain angles. The moat began leaking under the second family's ownership and they filled it with dirt, and planted a garden. By the time the house came on the market again in 1997, it had fallen into disrepair. Because of the value of its prime location, it was unable to immediately find a buyer uninterested in a tear down of the property. Consequently Michael Libow, a real estate agent, who did not want to see the home torn down, purchased it and began a gradual renovation. After tall, black fencing was initially placed around the lot, the owner received hate mail from people who thought he was going to tear it down.
The home has been called a precursor to Walt Disney's concept of Imagineering, whereby stage sets become fully realized environments. And, architect Charles Willard Moore once described the building as the "quintessential Hansel and Gretel house."
Spadena House 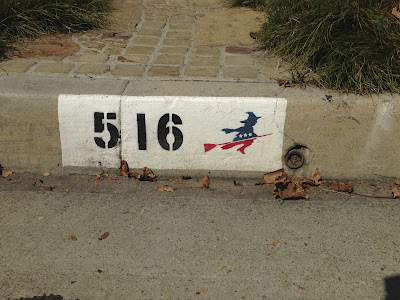 You can not miss this house if you are in the neighborhood. It's a funny, quirky house that sits in the sea of gorgeous mansions and multimillion dollar homes.
You are more likely to see a car or two drive by and park while you're there. 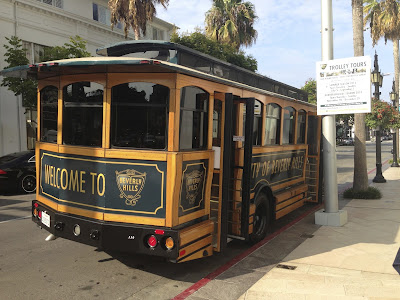 This Trolley Tour is quiet a treat, it's a 40-minute tour that travels around Beverly Hills. The tour shows you a variety of celebrity homes, Beverly Hills "hot spots", and some random fun facts. For $5 you're not going to get a high end tour, but it's a nice little ride around town in a cool air conditioned car. We didn't make our initial 3:00 tour as we planned, so we went to visit the Spadena House, which is located less than 10 mins away.


TIP!: parking can be tricky in Beverly Hills, so make sure you know don't pay more than $2/hour and parking is FREE after 6pm in most locations (check for signs or posting for update parking information)

- if you're a walker you'll enjoy this next part -

Beverly Hills commercial district is rather small, so everything is relatively close within a mile or so distance.
We have walked the Beverly Hills Gardens before, and they're a fun easy breezy walk, however if you keep on walking you'll find some pretty neat treats. 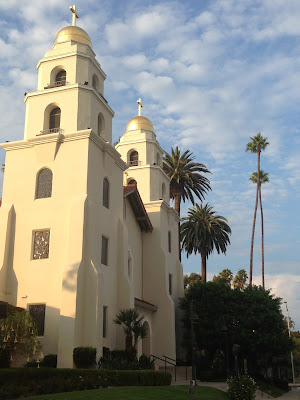 This church is absolutely beautiful from the outside.

FACT: Frank Sinatra had his funeral services at this church.
(which we learned from the Beverly Hills Trolley Tour)

Unfortunately we were unable to go inside, but if you are planning to visit this church, check their website, or give them a call that way you can have up to date hours of operation. 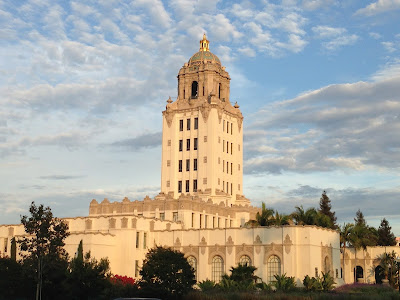 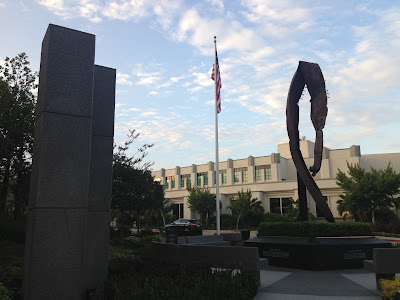 This beautiful memorial is located next to the fire department, and what a sight it is. The memorial features what seems to be an iron rod from the WTC (no confirmation or signage was found), a replica of the World Trade Center, as well as with benches and water features. This is one of the most well done tributes I have seen for 9/11. 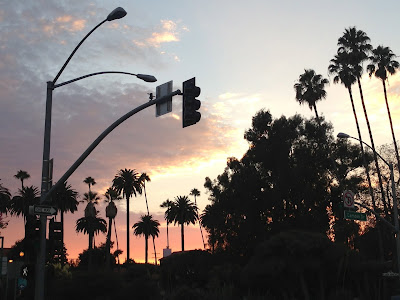 I had a an amazing time exploring Beverly Hills, traffic is a mess as always but when you're not in a rush and have nothing but time, it's always fun just getting off the couch and enjoying the view.

for more pics make sure to check out my new photo journal
www.kriswithakay.smugmug.com